Push Your Holiday Sales Into Orbit With an Inbound Marketing Campaign 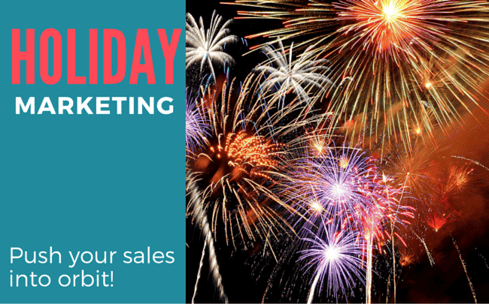 If you really want to add some sparkle to your 4th of July marketing plan, you’re going to have to do a whole lot more than post a pretty flag picture on Facebook. Instead, take advantage of a galaxy of enterprising ideas inspired by inbound marketing. Create a campaign to remember today filled with patriotism, vacation and fun. What’s summer anyway without red stripes, white stars and blue skies, and a light-hearted strategy to sales? A sort of popsicle cocktail approach, if you will. With a little kick. You game? Let’s do it.

To first put it all in perspective, Fourth of July spending on food alone is expected to top $6.6 billion this year, according to the National Retail Federation. Additional stats suggest that $725 million will be collectively spent on sparklers, cones and fountains. Nearly 23 percent (or 50 million people) will buy patriotic clothes and decorations. U.S. consumers will each spend $71.23 in preparation for this 24-hour testament to American freedom.

Even if your customers aren’t ball game and hot dog aficionados or backyard pyrotechnics, the Fourth of July is a bonanza for business because, seriously, do you know any U.S. citizen who isn’t at least aware of the anniversary of the Declaration of Independence’s adoption? It’s a fine holiday to align your company with, as long as you do it with punch and polish.

Plan a Patriotic Photo Contest. Ask customers to share how they show their American pride in exchange for great prizes. You could go the extra mile and include an entry form as part of the campaign and capture valuable data. Last summer, Espoma Organic put together a contest asking website visitors to post a picture on Facebook of their pets strutting Fourth of July style and then share the link with friends and family, encouraging them to vote with a “like.” The contest winner was determined by the most likes submitted during the designated period and received a $100 VISA gift card.

Add Value. Curate a short list of summer recipes or, get really creative and produce an interactive guide to watching fireworks in your city. UrbanDaddy did that in New York City two years ago, showing exactly where the firework barges were so people in different areas of the city could plan their viewing parties. This idea was unique and helpful to the company’s audience.

Design a Festive Home Page. Macy’s Department Store put clear calls-to-action on their homepage offering incredible seasonal savings. In the background, the cityscape and fireworks were powered by GIF (a.k.a Graphics Interchange Format, a graphics image that moves.)

At first glace, Wayfair put together a traditional collection of well-chosen items to feature, but mix them with the wedges of watermelon, tall glasses of ice tea and America’s favorite board game Monopoly and it’s a sophisticated and whimsical party ensemble.

Create Interesting Imagery. Use what you’ve got. Zappos developed a super cool picture for Facebook by arranging red, white and blue high-top sneakers in a flag design. Lowe’s built a spectacular fireworks display using only common items found in any of their stores to feature on Vine.

Develop Entertaining YouTube Videos. At first glance, Independence Day and a British beer company have nothing in common, but smart marketers make lemons out of lemonade all the time. Fourth of July was just another opportunity for Newcastle Brown Ale to make some waves—this time via a series of 16 funny YouTube videos that asked American and British celebrities “what if the British had won the war?” The company didn’t take themselves too seriously and invited viewers to laugh along with them. Humor can win over customers every time.

Go Big with a Business Partner. Here is a big company idea that can be downsized for the little guys. Uber announced on their blog that they would be teaming up with Blade to provide helicopter rides from NYC to the Hamptons on the Fourth of July only for only $2,500! If that’s a little over the top, think about a business whose products or services might enhance yours and team up with them.

Make Your Emails Shout Summer. OK, I couldn’t end this blog without talking up some baseball and hotdogs. Sorry! This is just such a great example of a simple way to make a big splash with your customers. ScoreBig’s email subject line was “Open this email if you like 1) Hot dogs 2) Baseball 3) Savings.” Who wouldn’t open that email? Included inside there was a cool graphic, naming hotdogs from all the famous ballparks.

However you choose to do it, use this holiday as an opportunity to get creative, highlight what sets your company apart from the competition, connect with your customers, and most of all, have fun!

How to Clean Your HubSpot Portal After Cancelled Events